Like boxing, powerlifting is categorized into classes, but height still plays a crucial role. Athletes within a specific weight class are placed within the same height range and body characteristics. Lifting involves moving weight up and down, making it harder for tall athletes to lift higher.

This explains why shorter weightlifters have an advantage over their counterparts. However, height is not an issue for some lifters who broke the bias. You might consider going through this list if you have never heard about tall weightlifters. Some are even taller than 6 feet and still hold world records. 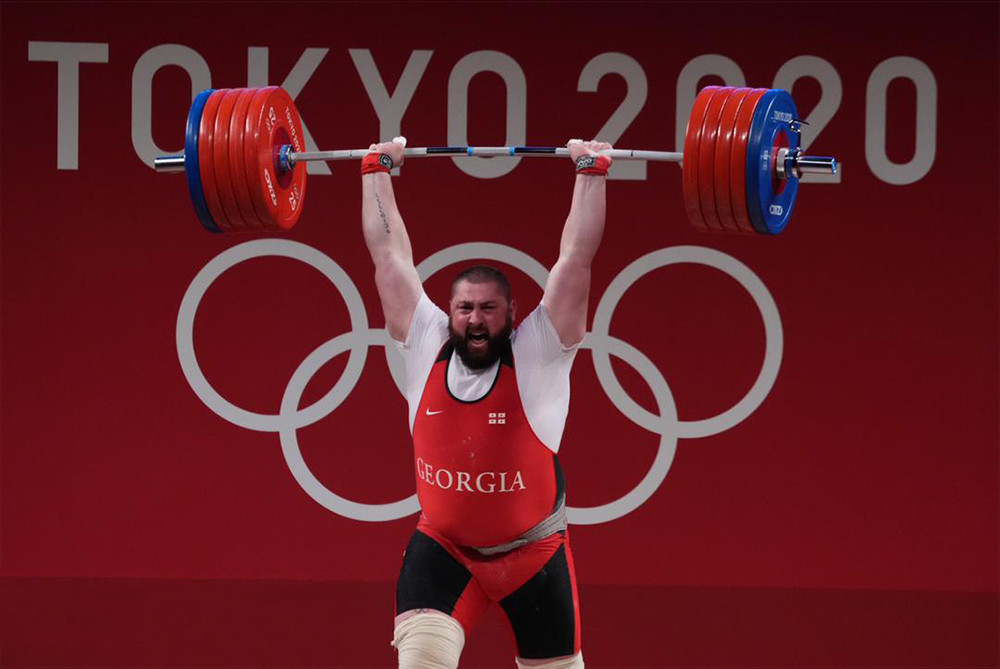 Lasha Talakhadze is a Georgian weightlifter who holds an all-time world record regardless of weight category in the snatch, the clean and jerk total from 2021.

Talakhadze has won the Olympics weightlifting championship twice and is a five-time world champion.

He has also won the European championship six times in the super heavyweight category. Currently, Lasha is the tallest weightlifter ever at 197 centimeters (6 ft. 6 in), weighing 182.9 kg (403 lb.).

Behdad Salimi Kordasiabi is a retired heavyweight weightlifter from Iran. He has won multiple gold medals, including the 2012 Olympics, 2010-2011 World Championships, 2010-2018 Asian Games, and 2009-2012 Asian Championships.

Sailing is the second tallest heavyweight weightlifter in history, standing at 197 cm (6 ft. 6 in). The 32-year-old athlete retired in 2018 after winning a gold medal in the 2018 Asian Games with a total weight of 461 kg.

From the Tatar ethnic origin of Uzbekistani, we have Ruslan Nurudinov as the third-tallest weightlifter ever. Nurudinov won the gold medal at the 2016 Olympics, setting a new record in the clean and jerk at 237 kg.

Dmitry Vladimirovich Berestov is a Russian weightlifter who won the gold medal in the 2004 Summer Olympics in the 105 kg category. Berestov stands at 186 centimeters (6 ft. 1 in) tall, weighing over 105 kg (231 lb.).

However, in July 2006, Berestov failed a drug test and was banned from the competition for two years. However, he returned in 2008 and won the gold medal in the European Weightlifting Championships.

Before becoming a politician, Hossein Rezazadeh was a pro weightlifter. He has won the Olympic gold medal twice, is a four-time world weightlifting champion, and is a five-time Asian champion.

Besides his global accolades, Rezazadeh is a four-time winner of the Iran Sportsperson of the year award, surpassing any other athlete in the country. Hossein Rezazadeh is among the tallest weightlifters at 186 cm (6ft 1 in).

Szymon Piotr Kolecki is a retired polish Olympic champion weightlifter, and currently, he is in the MMA. He won the silver medal in the 2000 Olympic Games in Sydney and gold at the 2008 Beijing Olympics.

Both his medals were in the 94 kg categories. At 185 cm (6 ft. 1 in), Szymon Kolecki remains one of the tallest weightlifters ever.

Gleb Olegovich Pisarevskiy is a Russian weightlifter and champion. Gleb might not have many accomplishments, but he is recognized as one of the tallest weightlifters ever.

Oleksiy Pavlovych Torokhtiy is a Ukrainian weightlifter and Olympic gold medalist in weightlifting before being disqualified for doping.

He has participated in two Olympic Games in 2008 and 2012, and is also a former member of the European Weightlifting Federation Executive Committee. Oleksiy stands at 181 centimeters (5 ft. 11 in), weighing 104 kg (229 lb.).

He was disqualified in 2019 after testing positive for performance-enhancing drugs. 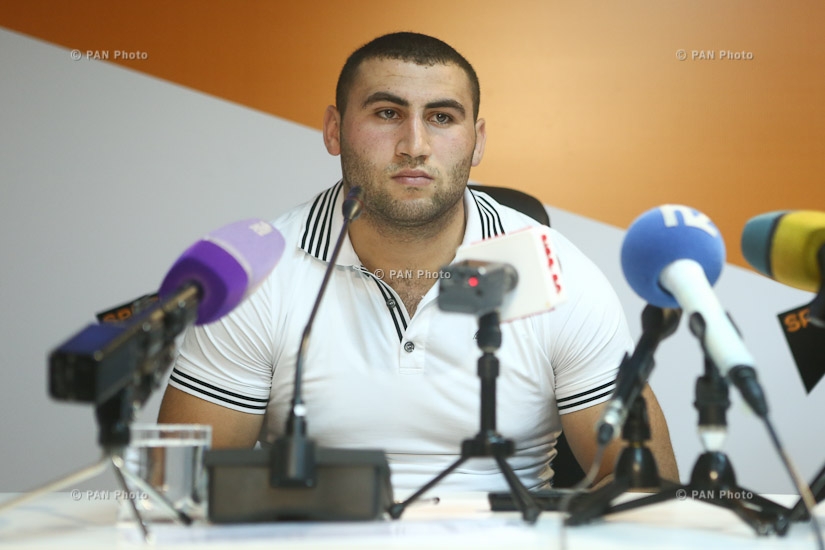 Simon Martirosyan is an Armenian weightlifter and Olympian. He is a two-time world champion and two-time European Champion in the 105 kg weightlifting category. He maintained this category until 2-18 before proceeding to the 109 kg category.

He won gold medals in the European Weightlifting Championship of 2019 and finished with 427 kg.

Paul Edward Anderson is the man, the myth, and the legend. The American sportsperson is a weightlifter, strongman, and powerlifter. He is an Olympic gold medalist, a world champion, and a two-time national champion in Olympic weightlifting.

Anderson is a significant figure in the development of competitive weightlifting. Paul Edwards Anderson was the tallest weightlifter of his time, standing at 179 centimeters (5 ft. 10.5 in) and weighing 163 kg (360 lb.).

Milen Dobrev is a Bulgarian weightlifter who became an Olympic champion in 2004 in the heavyweight middle class. In the same year, he won the European Championship in Kyiv.

Dobrev is the first Bulgarian to win an Olympic title in weightlifting as a sportsperson from Plovdiv.

Karlos Nasar is among the most prominent Bulgarian male weightlifters. He is the gold medalist of the men’s 81 kg category event in the 2021 World Weightlifting Championship in Tashkent, Uzbekistan.

In 2021 he was part of the European Weightlifting Championships in the 81 kg category. He won silver in the snatch, and a gold medal in the clean and jerk portion with 206 kg, setting a new European record.

Antonino Pizzolato is an Italian Olympian and weightlifter who has won the European Champion three times, competing in the 85 kg category.

In the 2019 World Weightlifting Championships, he finished sixth place with 358 kg in the 81 kg category.

Kianoush Rostami is an Iranian Kurdish Olympian weightlifter who competed in the 2016 Summer Olympics in the 85 kg category.

He won the gold medal and set a new world record with a total lift of 396 kg. In the 2012 Summer Olympics in London, Rostami won the silver medal. 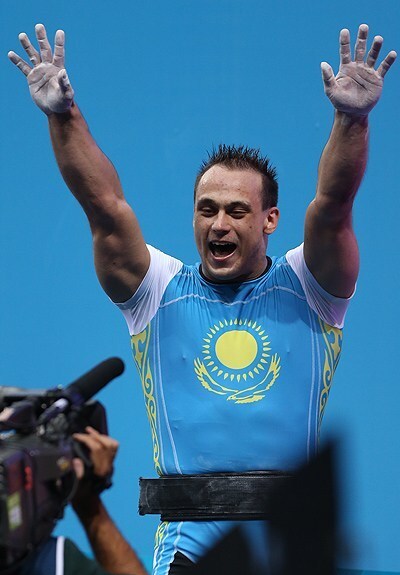 Unfortunately, Ilya Ilyin tested positive for a performance-enhancing drug, Stanozolol, and was stripped of his Olympic gold medals for violation.

Andrei Mikalayevich Aramnau is a Belarusian Olympic and World weightlifting champion. Andrei was born with six fingers on one hand before removing them through surgery in 2002.

He began training for the European championships and won silver in the 94 kg category in the 2006 Junior World Championships with 423 kg.

Lü Xiaojun is a three-time Olympic and five-time world champion Chinese weightlifter in the 77 kg category. In 2018, he joined the 81 kg after the International Weightlifting Federation recognized these categories.

He represented China at the 2013 world championships and had to drop out after the snatch in the competition.

Sohrab Moradi is an Iranian weightlifter and gold medalist in the 2016 Olympics in the 94 kg weight division. He is also the champion of the 2009 and 2012 85 kg categories.

Unfortunately, Sohran Morandi was banned from weightlifting for two years after testing positive for methadone.

There are many other unknown weightlifters out there who are proving to people that height does not determine your success. The weightlifters covered here have won multiple records; some are still active in the sports. However, you can tell that their height-to-weight ratio played a big role in shaping their career.