Height is a major contributor to exhibiting the qualifications of a good basketball player. A taller height helps you perform better and more efficiently. So, when it comes to height, women playing in the Women National Basketball Association (WNBA) are extremely proud of their height.

Here is a list of the tallest WNBA players in the world. Notably, they all played center position.

Carolyn Moos is now retired, but at six feet and six inches tall and 183 pounds, she was one of the tallest women in the WNBA.

Standing over six feet tall at 13 years old, she began playing basketball in the sixth grade. She played for the Phoenix Mercury.

Fowles and Elena Delle Donne of the Mystics during the 2017 semifinals.
CC0, Link

At six feet and six inches and weighing 200 pounds, Sylvia Fowles is among the tallest WNBA players currently playing the game.

Kara Drinan is a retired WNBA player who played for the Houston Comets. At six feet and seven inches tall, weighing 227 pounds, and nicknamed Big Girl, Kara knew at a young age where her height would end up taking her.

She won a gold medal at the 2000 Olympics and played for the U.S. women’s national basketball team in 1998, where they were crowned World Champions. 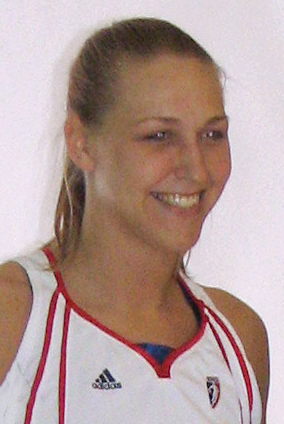 Katharen Mattera, also known as Katie, is retired but played for Chicago Sky in the WNBA. Now at six feet and seven and a half inches tall and 240 pounds, Katie started playing basketball at a young age.

She’s been the head coach of the Cornerstone University women’s basketball team since 2012.

Lindsay Taylor is a retired WNBA player who played for the Houston Comets. At six feet and eight inches tall and 200 pounds, Lindsay was truly among the tallest to play the game.

Although she was born in the U.S. Lindsay also played for other professional leagues, including the Turkish Women Basketball League.

Brittney Griner is among the tallest women in the WNBA still playing the game. Brittney is six feet and eight inches tall weighing 205 pounds.

She’s led the league in blocks for five straight seasons and won the NBA title in 2014. That same year, she was named to the All- WNBA First team.

The two-time Defensive Player of the Year is a four-time WNBA All-star and is the WNBA’s current scoring champion. She plays for the Phoenix Mercury.

Elizabeth “Liz” Cambage is an Australian native who is still actively playing in the WNBA. She’s six feet and eight inches and 216 pounds.

Elizabeth made the 2011 WNBA All-Star team and was also named to the WNBA All-Rookie team that year. Currently, Elizabeth plays for the Las Vegas Aces.

Maria Stepanova is a Russian native who is actively playing in the WNBA. Maria is six feet and eight inches tall and weighs 187 pounds.

Maria represented Russia at the 2004 Athens Olympics and the 2008 Beijing Olympics, where she helped them both win bronze medals.

Zheng Haixia is a retired professional basketball player. She is a native of China who played in the WNBA for the Los Angeles Sparks.

She is the second tallest female basketball player to ever play in the WNBA. Zheng represented China in four Olympic games; they won the Bronze medal in 1984 and the Silver medal in 1992.

She is six feet and eight and a half inches tall and weighs 229 pounds.

Malgorzata Dydek was the tallest woman to ever play in the WNBA. A native of Russia, Malgorzata played for the Los Angeles Sparks.

She was seven feet and two inches tall and weighed 222 pounds. Malgrozata holds the title for All-Time Leader in Blocks with 877 during her WNBA career.

After playing for the Sparks, she became the coach for the Northside Wizards in the Queensland Basketball League.

She died of a heart attack in Australia in 2011.